Putin calls his war in Ukraine “successful”: everything according to plan 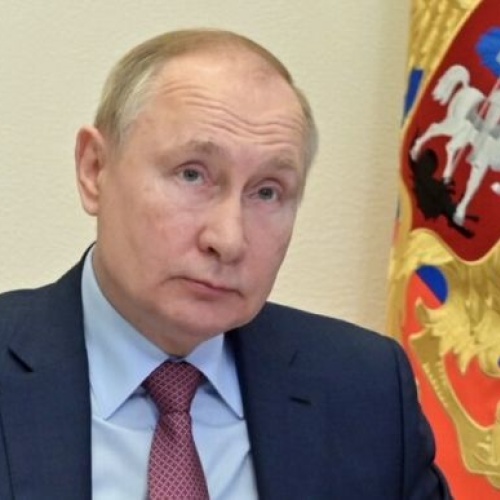 Vladimir Putin called the Russian army’s actions in Ukraine successful and said the war is going according to plan.

Source: Putin at a meeting on measures of social and economic support for Russian regions, Russian media

Direct speech: “The operation is progressing successfully, in strict accordance with the pre-approved plans.”

Details: According to Putin, the Russian Defense Ministry’s tactics “have fully justified themselves, everything is being done to avoid civilian casualties” – although thousands of civilians have already died at the hands of the Russian military in Ukraine, more than a hundred of them children.

The Kremlin boss also said that Western patrons “are pushing Kiev toward bloodshed” by supplying weapons and mercenaries – even though it was Russia that attacked Ukraine and hired people even in Syria for money to fight in Ukraine.

Putin said that the Russian military has been doing everything possible to avoid civilian casualties in Ukraine.

Putin reiterated that Russia has no goal of occupying Ukraine – even though its troops are rampaging near Kiev and in other cities in Ukraine.

Putin said that Russia has no goal of occupying Ukraine – even though its troops are rampaging near Kiev and in other cities in Ukraine.

Putin said that “all diplomatic options have been completely exhausted” and Russia “has been left with no options to solve the problems peacefully.”

Putin’s direct speech: “I want to say this for the first time – at the very beginning of the operation in Donbass, the Kiev authorities were asked through various channels to avoid senseless bloodshed, not to engage in hostilities, simply to withdraw their troops from Donbass. They did not want to. But well, that’s their decision.

If our troops had only acted in the territories of the people’s republics, helped them liberate their lands – this would not have been the final solution, would not have led to peace and would not have fundamentally eliminated the threat to our country already – to Russia. On the contrary, there would have been a new front line around Donbass and along its borders, shelling and provocations would have continued.

Details: Putin said that Russia is ready to discuss the “issues of principle for Russia” of “demilitarization and denationalization” of Ukraine at the talks.

Putin also said that Russia is ready to discuss the “issues of principle for Russia” of “demilitarization and denationalization” of Ukraine.

Putin also repeated the cliches of Russian propaganda: that Kiev, with outside help, could allegedly create nuclear weapons whose target would be Russia, that components of biological weapons were allegedly created on Ukrainian territory.

And both Ukraine and its Western partners have denied both the development of nuclear weapons and biological weapons.

From the first days of the war, which Putin calls a special operation, the Russian Federation pounded residential areas of cities, destroying them and killing peaceful Ukrainians. Later, the occupiers began laying siege to the cities, starving and thirsting people to death.